What Does the Flag Stand For?

The Unthinkable Risk of Turning Our Backs on Inclusive American Values

This is a commentary on the meaning of our national flag, first posted on July 4, 2021 in Between Hell and High Water. The author, Michael Koetting, writes a regular column, Between Hell and High Water, and is an advisor to Civic Way. Michael holds a PhD in Sociology from Harvard and served as VP of Planning at the University of Chicago Medical Center and Deputy Director for Planning at the Illinois Department of Health and Family Services, among other public sector positions.

Just before the 2016 election, I was taking my then five-year old grandson home from swimming. As we drove through a residential neighborhood, he asked what was that sign in someone’s front yard. Then, before I could answer, he announced: “It has a flag on it. It must be for that bad man.” (Trump was, of course, the “bad man.”)

On the way home, I got a chance to look closer. It did indeed have an American flag motif, but it was hardly a Trump poster. 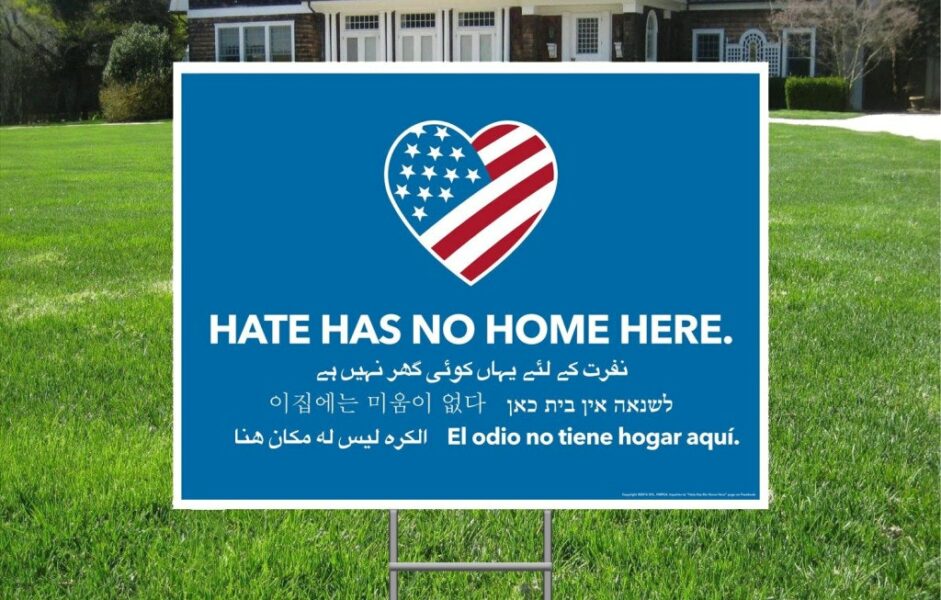 What struck me was that a five-year old had picked up the idea that American flags were emblems of the right. Although this sharpened my appreciation for how much five-year olds pick up, it left me feeling something had gone very awry in the country where, growing up, I started every school day pledging allegiance to the flag of a country that promised “liberty and justice for all”.

Given today is the Fourth of July, it is a good time to consider what exactly a country should mean to us and how a flag represents that.

The Meaning of Country

Of course part of our idea about country is simply the recognition that this is us. It’s the same reason I always feel good when Americans win at the Olympics, however mad I might be with our government at the time. Nothing particularly rational. Just recognition that there is some connection that strikes a chord.

However, the notion of us is protean. Presumably the differentiation between “us” and “them” has its roots deep in human history where the dividing lines were fairly clear and there were plenty of reasons to be wary of people you didn’t know.

But fast-forward a bunch of millennia and the world is much messier. We’re divided not just into clans, but into religions and races and cultural groups not to mention nesting political units, which might not be getting along with each other. How does one order the primacy of allegiances?

“Country” demands a special place in this array because it structures so many of the quotidian elements of our day-to-day life—our money, our communication system, our Olympic team, the borders that are strictly enforced and a host of other matters.

But, beyond the pragmatic dailys, country is also a general set of principles that provide broad guidance for the generation of specific policies that define the particular nation state. In an authoritarian regime, the connection between the national principles and policy is direct and not so complicated. In some countries—say Norway—there is enough overlap among various ways of defining “us” that the underlying principles don’t need constant examination.

But the United States has always had a more difficult hand to play. It arose as a confederation of relatively independent political units with some fairly significant cultural differences that needed a common purpose against the common enemy.

Two principles filled the bill. First, and foremost, all men should be free to pursue their own happiness and, secondarily, all men are created equal. Both of these were radical for their time and, in fact, super-charged a profound change in all political organization henceforth.

With hindsight, it’s obvious these principles were adopted in only a blinkered way and, moreover, they sometimes bumped up against each other. But that was the hill on which the new nation chose to risk dying on. It didn’t die and, in fact, thrived. But as it grew, and as other parts of the world further evolved the principles America had adopted, it became impossible to avoid their contested nature.

The inability of the country to agree on the meaning of those principles was the root cause of a horrendously violent civil war. The Confederacy was a choice that other ways of defining “us” –state, race and land—were more important than expanding the limited principles of the Revolutionary War, turning their back on the dynamic nature of those principles.

The Challenge of Defining Us

The Confederacy lost the war, but 150 years later, it is not clear the majority of people on the losing side ever acquiesced to these broader principles, particularly as the rest of the country expanded them to women, people of color, and then other identities.

To be fair, the population of the North was nowhere near unanimous in support of applying these principles more broadly. But enough were that for most of the last century the country was willing and able to present itself to the rest of the world as being organized on an evolving definition of these principles.

But other ways of defining “us” simmered below the surface. For the most part, the tension was kept at manageable levels by simply ignoring how incomplete the application of these national principles was and had always been. But demand for and enactment of the Civil Rights laws in the Sixties seems to have kindled a definitional struggle concerning these principles.

It is in part the case that there is no ultimate “resolution” of these principles. They are so foundational and so absolute—what is “freedom” and what is “equality” and how do these two ideas both inform policy—people will and should continually debate them. But if the poles in the debate become too far apart, the underlying sense of “us” starts to fall apart. An article in Scientific America observes:

This phenomenon differs from the familiar divergence each party holds on policy issues related to the economy, foreign policy and the role of social safety nets. Instead it centers on members of one party holding a basic abhorrence for their opponents—an “othering” in which a group conceives of its rivals as wholly alien in every way.

I don’t think the sense that a nation represents “us” stems from how its citizens define the national principles. Probably sensibly, most never think about things in such an abstract manner. On the other hand, when there is a divide in how to interpret those principles at the level of policy, if it is virulent enough that the political classes start to exploit other ideas of “us”—class, race, religion—then the idea of “us” as a nation starts to wane. We are approaching that point.

Naturally all sides claim they are promoting the “true” American values. In the case of the flag, the forces of a more inclusive version of the American principles were willing to let those with narrower interpretations own the flag–in large part because it made it so easy to underline the contradictions between the larger principles and those who hid behind the flag. 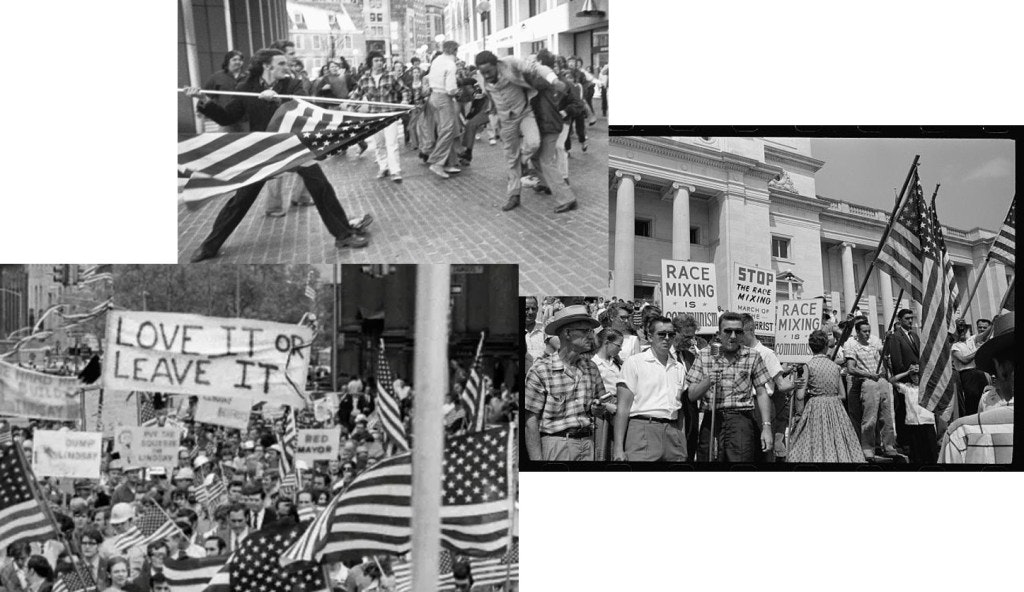 But there is an ironic give-way as to the true sentiments of those proposing a narrower view of our national principles: they are willing to tolerate substituting the American flag with the flag under which parts of the country took up arms to protect the most narrow version of those principles. 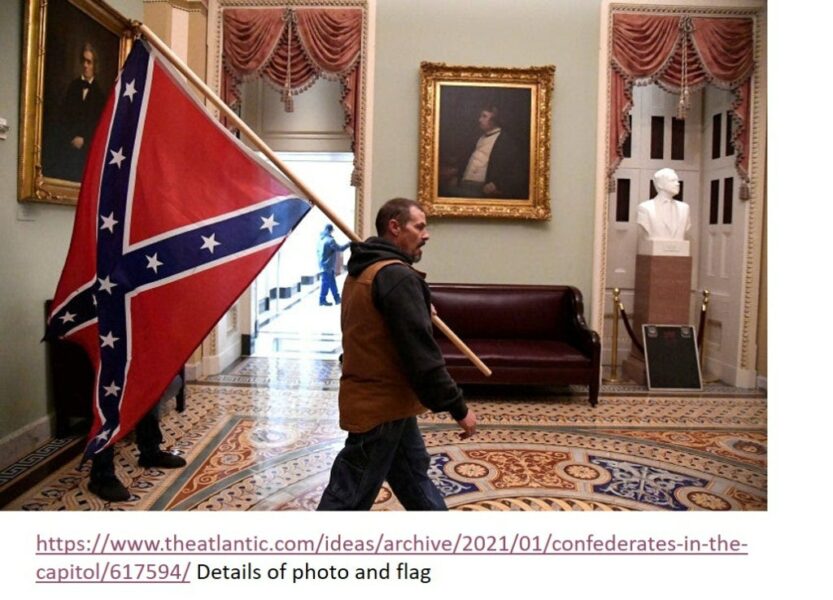 This is not a casual coincidence. The flag of the Confederacy is born in rejection of the notion that all men are free. Today’s Confederates may not be pushing a resumption of slavery. But their fundamental beliefs are that some should be more free and that it is tough luck if the ability to pursue one’s own happiness is limited by external conditions.

As noted earlier, the concepts of freedom and equality are complicated and it is both inevitable and appropriate that a society debate them and particularly how the two ideas interact since they exist in some important degree in tension with each other.

But unless there is a largely agreed upon center in these ideas, the “us” of nation is replaced with an ever-escalating sense of “us” versus “them” and the country is in deep trouble. In the extreme, there is civil war. Short of that, the country will be mired in uncivil discourse and find it difficult to carry out the major functions of a nation, let alone the more difficult task of maintaining a democracy. By then, the flag is only one more element of discord.

The Values Beyond the Symbols

What we have tried to tell our grandson is to look beyond the symbols themselves to recognize the values to which they aspire. If the country respects and protects those values and their aspirations, the flags will, with any luck, take care of themselves. But the flags aren’t the important thing. It’s the values.